Catholic Treehouse Rosaries are designed to excite the senses. The weight, the sound, the feel of the beads in your fingers, the appeal of how it looks… All of these things add to the meditative nature of praying the Rosary. Which is why all of these things are factors in our Rosary designs.

We use only the best quality hardware at each price point. We use heavy gauge wire and chain for durability. Crucifixes and centers are selected for their rich detail. The beads are quality Czech fire-polished glass crystal, Italian Murano hand-blown millefiori glass, Swarovski crystal, or premium ceramic, natural wood, stone, or metal for incomparable feel and visual appeal.

What’s more, all of our Rosaries have. a no-hassle no-questions lifetime warranty. If at any time your Catholic Treehouse Rosary needs fixed, for any reason, simply return it. We’ll repair it for free. If we can’t repair it for some reason, we’ll replace it at no charge.

What is the Rosary?

In 1208, a Spanish priest by the name of Dominic Guzman was traveling through France and preaching against heresies. Growing discouraged at his lack of success, he retreated to the woods where he fasted and prayed for Divine help. After three days, the Blessed Virgin Mary appeared to him and told him that he would need to pray the Marian Psalter in order to be successful. The Marian Psalter was a prayer developed by Cistercian monks consisting of 150 Hail Mary’s, divided into groups of 10 by Our Fathers. It was not, however, meditative or one that could be preached. The Blessed Mother revealed to St. Dominic that certain mysteries — stories of Christ’s life — should be meditated on for each set of Hail Mary’s (also called “decades”). Meditating on these mysteries would then unlock them, and these mysteries could then in turn be preached against the heresies that were being spoken against Christ’s incarnation, life, death, resurrection, and ascension.

This form of prayer would come to be called the Rosary: a “wreath of roses.”

The Rosary is a gift from the Virgin Most Powerful to us, and it is a mighty weapon in spiritual warfare.

Pater – Also known as an “Our Father” bead, there are a total of six of these beads on a standard Rosary. Paters always “stand alone” with a space on either side of the bead.
Ave – Also known as a “Hail Mary” bead, there are a total of fifty three of these beads on a standard Rosary. Aves are always grouped together.
Decade – A Pater followed by ten Aves. There are five Decades in a standard Rosary.
The Drop – This is the part of the Rosary with the Crucifix on the end, followed by a Pater, a group of three Aves, and another Pater.
Center – The center medal that connects the Drop to the rest of the Rosary, and closes the loop of the Rosary.

How to say the Rosary

We’ve put together a free 1-page PDF that you can download by clicking here. It includes the prayers, mysteries, and order of prayer. It also includes the fruit of each mystery and scriptural references. 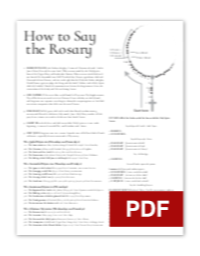